Meet Cathy Jordan,  who has found that smoking cannabis is keeping her ALS at bay, and keeping her alive.  You can visit her website & read her testimony here. [Later edit: this site is no longer active. In searching for it, this popped up: Raid Of The Day: Florida Cops Raid Cathy Jordan, Medical Marijuana Activist Who Suffers From Lou Gehrig’s Disease]

“I NEVER wanted to tell ALS patients to smoke marijuana as medicine. But, after fighting the drug war for ten years, and having it fall on deaf ears and cold hearts, no pharmaceutical company has made a drug to help. In 1989 I smoked Myakka Gold on the beach in Bradenton. I felt the ALS stop and every day I got stronger. I am sorry to say this form of cannabis has been eradicated by the DEA. I spend every chance I can discussing this with other ALS patients and neurologists to see what other strains of cannabis help them.

In 1989 I began to tell my neurologist that cannabis helped me and he thought I had dementia and that I was not handling my demise very well. I said my disease had stopped and he turned immediately to my husband and suggested he commit me to a mental facility. Needless to say, I stopped talking about the fact that my disease had stopped and continued to smoke cannabis.

In 1994 a doctor at the MDA Clinic at Sarasota Memorial Hospital asked me what I was doing to keep myself alive. I told him and he gave me the best advice ever, which was, “Smoke all the cannabis you can and never tell a soul, because they’ll never believe you.”

In 1996 the new doctor of the MDA told me that my using illegal drugs would make me ineligible for stem cells if they ever found a cure. The very next day I became an activist. On February 22, 1997 I officially came out against the drug war and I am not a criminal . . . just alive!

Now, after seeing over two dozen neurologists and attending many seminars involving cannabis and research of cannabis, I feel quite safe in suggesting that anyone with ALS who chooses to use cannabis do so. Also, I suggest you discuss this with your neurologist even if they don’t want to hear it. I find that I know more about ALS and the use of cannabis than the majority of neurologist I’ve spoken with. Some do not believe any of their patients smoke and I always ask if they have a medical assistant? If they say yes, I ask them to ask their assistant if any of their patients smoke. The answer is always yes and the doctor is always shocked.”

The following comes from the abstract “Marijuana in the management of amyotrophic lateral sclerosis ” presented by the American Journal of Hospice and Palliative Medicine:

Marijuana has been proposed as treatment for a widening spectrum of medical conditions. Marijuana is a substance with many propertiesthat may be applicable to the management of amyotrophic lateralsclerosis (ALS). These include analgesia, muscle relaxation, bronchodilation, saliva reduction, appetite stimulation, and sleep induction.

In addition, marijuana has now been shown to have strong antioxidative and neuroprotective effects, which may prolong neuronal cell survival. In areas where it is legal to do so, marijuana should be considered in the pharmacological management of ALS. Further investigation into the usefulness of marijuana in this setting is warranted. 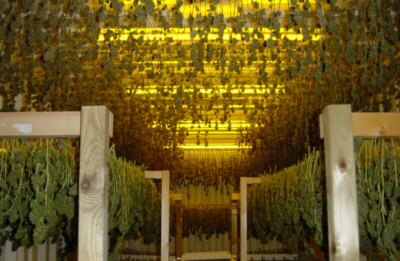 ALS wreaks its havoc by harming nerve cells that control muscles. As a consequence of the damage, an estimated 5,000 Americans afflicted annually experience progressive muscle weakness that can hinder movement, speech, even swallowing and breathing.  New treatments for ALS are desperately needed.

“The only FDA approved drug for ALS, riluzole, extends life on average by about two months,” say researchers from California Pacific Medical Center in San Francisco. “Evidence from our study suggests that a marijuana-based therapy could create a much greater effect, perhaps extending life by three years or more.”

In the study, ALS mouse models were given either the marijuana compound THC, the marijuana compound cannabidiol, cannabidiol plus THC, or a placebo daily following the onset of disease signs. The researchers measured disease progression by testing how long the mice could stand on a slowly rotating rod. The more severe their nerve cell degeneration, the less time the mice can balance on the rod. In addition, two conditions of ALS, the loss of movement ability and survival time, were analyzed using a mathematical model.

“We found that treatment with THC delayed disease progression by seven days and extended survival by six days in the mouse model,” says Abood. “This corresponds to three years in human terms.”

Results also indicate that the combination of THC and cannabidiol further delays disease progression. Treatment with cannabidiol alone, however, had no effect.

In April, Cathy Jordan sat on a panel at the Cannabis Therapeutics Conference in Arizona. Before taking the stage, she discussed the medical use of cannabis for ALS with Jahan Marcu, the Philadelphia Medical Marijuana Examiner.

Cathy Jordan first noticed something was wrong in summer of 1985 when she couldn’t pick things up. Her muscles weren’t responding. In 1986, she was diagnosed with ALS (Amyotrophic Lateral Sclerosis). ALS, also known as Lou Gehrig’s disease, is characterized by the death of motor neurons leading to loss of limb control, breathing, swallowing, speech and widespread cellular dysfunction. Most cases of ALS are sporadic; it is not a viral or autoimmune disease.

“Most people start using a feeding tube because they are afraid of choking to death”, says Cathy.

In 1986, she was given 3 – 5 years to live according to her neurologist. Nearly 3 decades later, she is still alive and living with ALS.

“All my docs are retiring or dead. I’ve outlived 5 support groups and 4 neurologists,” said Cathy. This actually posed a problem for Cathy who lost her social security benefits because she lived passed her expiration date. The state of Florida said her ID and regular documentation wasn’t good enough to prove she was alive and to continue to receive benefits. She had to ask her neurologist to fill out paperwork to prove she was still alive.

Mrs. Jordan began using Cannabis from a Florida grower to treat her ALS in the late 80’s. “Donny Clark provided my medicine, grown in the Myakka River Valley…he was busted and sentenced to life in prison, and that strain of Cannabis was lost.”

“You know, they say the fountain of youth is in Florida. Maybe it was something in the soil that made this plant helps me…and I don’t understand why doctors wouldn’t study me. But I still would like to know why this is helping me.”

At first, doctors wouldn’t accept that marijuana could be responsible for Cathy’s extended life span. Other doctors thought that smoking anything would impair her lung function and even threatened to have this paralyzed women committed, simply based on the fact that she thought Cannabis was actually helping her.

“I visited a neurologist at Duke University. When I told him that I was smoking Cannabis, he didn’t know what to do with me. He was afraid. He wouldn’t even take my blood pressure because I was using an illegal drug.”

“I asked my docs if they would take a drug if it was neuroprotective, an antioxidant and an anti-inflammatory. They say ‘yes’ and ask me if I know of one. Cannabis, I tell them.”

Nearly three decades later, the science has caught up with this miracle patient. Scientists created a mouse with ALS, which was very exciting for Cathy. Research has shown that THC and other cannabinoids can benefit mice with ALS. The mounting evidence of cannabinoids halting the progression of ALS has started to change the attitudes of doctors and prominent researchers have recently called for ALS clinical trials with Cannabis or cannabinoids.

“They all agree today that I should smoke Cannabis,” says Cathy. “Twenty six years later, my original neurologist fought [successfully] to make sure Cannabis is legal for patients in Delaware.”

“There are ALS patients associations that fight for the right of patients to die with dignity. But what about my right to life?” asks Cathy. “Keeping my medicine illegal removes my right to life.”

For more on Cathy, see this article from April 2009 Cannabis Culture Magazine

For more on the role of Cannabis in treatment of ALS, see this page from Marijuana Policy Project

Cannabis and amyotrophic lateral sclerosis: hypothetical and practical applications, and a call for clinical trials:
http://www.ncbi.nlm.nih.gov/pubmed/20439484