As you can see from the graph below, Cannabis in its natural form has no recorded deaths, while Marinol/droabinol already has at least 4 deaths directly attributed to its use. It has only been around 30 years, while Cannabis has been healing humanity for thousands of years. But the DEA considers Marinol safer than natural Cannabis? 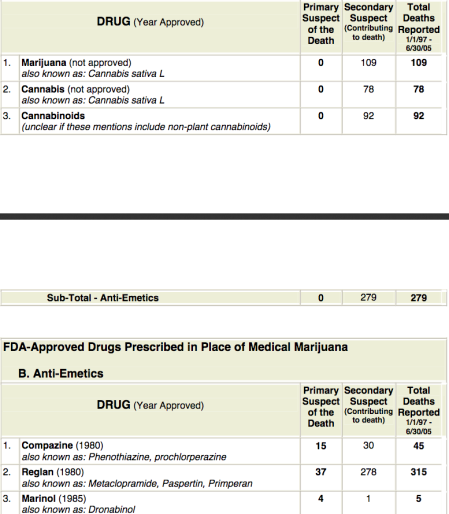 Earlier, we have written an article about synthetic marijuana and the dangers it poses to your health.

However, it seems that the United States Drug Enforcement Administration does not agree.

The DEA has just recently announced that it is granting Schedule II status to a synthetic THC drug developed by controversial pharmaceutical firm Insys Therapeutics. This definitely places synthetic THC in a much better category than authentic marijuana and its various authentic components such as CBD.

To recall, the DEA has previously officially classified CBD and all other marijuana extracts as Schedule I substances. This means that the DEA considers authentic marijuana in all its forms as having no medicinal value and having a high potential for abuse. It is, therefore, illegal under federal law.

What does this entail?

The classification of Syndros as a Schedule II controlled substance means that doctors from around the country can legally prescribe the drug.

Other substances listed as Schedule II drugs include OxyContin, Vicodin, Percocet, Adderall, and methamphetamine. Schedule II substances are drugs considered to have some medical value but with a high potential for abuse.

The U.S. Food and Drug Administration has earlier given Syndros its stamp of approval, and the DEA’s final scheduling is the last regulatory hurdle that the liquid dronabinol drug needs to pass through before making its way to the market.

Syndros contains dronabinol (Marinol), which is a synthetic compound containing cannabinoids found in the cannabis plant. Dronabinol contains THC in standardized concentrations and doesn’t contain other compounds that are found in street cannabis, which is not approved for medical use by the FDA.

Syndros was launched in late July this year as a treatment to help alleviate nausea and vomiting in patients undergoing chemotherapy. Insys also stated that Syndros can help address weight loss associated with anorexia among AIDS patients.

Insys officials have stated that synthetic drugs are consistent, highly reliable, and have the ability to meet the FDA’s strict demands and the rigorous requirements for subsequent commercialization.

The Chandler, Arizona-based drugmaker Insys Therapeutics has been beset with controversy after it was found to have donated $500,000 to a campaign last year that opposed the legalization of marijuana in Arizona. The cash infusion from Insys made up more than one-third of the total amount raised by the anti-cannabis group Arizonans for Responsible Drug Policy.

There are records showing that Insys’ donation is one of the largest single contributions ever made to any anti-marijuana legalization movement.

Aside from this, Insys has been investigated for the alleged improper marketing practices for Subsys, which is a spray form of the synthetic opioid fentanyl. The highly addictive fentanyl is approved by the FDA in the treatment of cancer pain.

Then, in October, Insys founder John Kapoor was arrested on charges of fraud and racketeering, along with other former top executives of the company. They allegedly bribed doctors and defrauded insurance companies. Aside from facing charges of fraud and racketeering, these former executives also face lawsuits from individuals and states for allegedly triggering the opioid epidemic in the country.

Kapoor pleaded not guilty to the charges and was released after posting a $1-million bail. He remains to be Insys’ largest shareholder.

But what about marijuana???

In 2016, the FDA junked a petition to remove cannabis from the Schedule I category, citing, in part, studies that showed marijuana is addictive to monkeys as well as causes increased appetite and “merriment” in humans.

2 thoughts on “DEA says Marinol is safer than natural THC, yet it has killed at least 4 people”